The jagged granite summit of Mount Wilhelm, the highest peak in Papua New Guinea, is quite a departure from the highland route that leads you there, which ascends through dense rain forest, temperate mountain forest, and open grassland before breaking out into rugged alpine terrain. The trek to the top of the mountain takes three to four days and although it isn’t technical, it involves some steep scrambling near the top. The snowfields that used to carpet the mountain no longer exist, but the air in the higher elevations is still cool and crisp. From the summit on a clear day there are spectacular views north to the Pacific Ocean and small coastal islands

Rising over 30,000 ft (9,000 m) from the ocean floor, Hawai‘i’s Mauna Loa is both the largest volcano and mountain in the world. Yet from a distance, its gently sloping sides and apparently flat summit belie this magnitude. The volcano’s 39-mile (63-km) circular trekking route cuts across a spectacular landscape of different types of exposed lava, and although it’s virtually lifeless here – there are no plants, animals, or birds in sight – the surreal rock formations provide a fascinating backdrop to the trail. As you approach the summit caldera, cinder cones, gas emissions, and ground swelling serve as a constant reminder that this is an active volcano, with plenty of punch still remaining.

Less than 10 degrees south of the equator lies the world’s highest tropical mountain range, Peru’s Cordillera Blanca (see also p85). These mountains, which cradle hundreds of glaciers and form part of South America’s continental divide, contain no less than 27 rugged summits that are higher than Mount Kilimanjaro and are cut sharply by plunging glacial valleys. It’s a mountaineer’s dream. The most accessible of these towering peaks is Copa, which can be climbed up and either climbed or skied down. Burros carry your equipment to a base camp, from which point you will follow the tongue of a glacier that leads to a route up the mountain’s western ridge.

On anyone’s list of bizarre flora, a carnivorous plant that can eat small mammals would certainly be near the top. On the same list you would also expect to find the parasitic Rafflesia plant, which has the largest flower in the world and is also known as the “corpse flower” because it smells and looks like rotting flesh. These are just two of the extraordinary plants found in the jungles of Borneo, where the ascent of mighty Mount Kinabalu begins in a shuttle bus carrying trekkers to the trailhead

The three-day climb of this giant granite dome begins at the Timpohon Gate, which lies at an elevation of 5,900 ft (1,800 m). Accompanied by mandatory guides, trekkers rise through forests of conifer and oak, cloud forest, and subalpine meadow. Like the rain forest below it, the mountain boasts a wealth of unusual fauna, including giant red leeches that prey on giant earthworms, extraordinary rhinoceros hornbills – birds that look as if they have a shoe attached to their heads – and the threatened orang-utan, one of the four great apes. Pygmy squirrels, fruit bats, and brightly colored tropical birds share the forest canopy on the steep mountain slopes. Hand-carved stone steps, moss-covered wooden stairs, and fixed ropes assist trekkers on the trail’s steeper sections. The final leg of the climb emerges onto a slippery surface of exposed granite that leads to the summit and boasts fantastic panoramas.

Cotopaxi, which is known locally as “the neck of the moon” because of its near-perfect symmetrical cone that seems to stretch forever upwards, is one of the highest active volcanoes in the world. Its last eruption, in 1877, sent pyroclastic rivers of fire streaming down all sides of the mountain, melting glaciers along the way and carving deep valleys with scorching mudflows that ran as far as the Pacific Ocean, 60 miles (100 km) to the west. Today, trekkers either camp or stay in huts on the mountain, where the most popular route to the summit can be climbed in a long day from a hut at 15,800 ft (4,800 m). Though not a terribly difficult climb, it should only be attempted by experienced mountaineers with appropriate climbing gear. 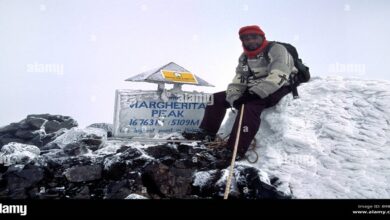